A 1999 classic, Office Space tells the story of Peter Gibbons (Ron Livingston) who works an IT office job he hates. As he seeks to change his situation, he is able to enjoy his life to the fullest. We’ll be showing Office Space as the second film in our “Careers, Conflicts, and Callings” Series in Miller Auditorium (Stark 103) at 7 pm October 5th, 2019 on the Winona State University campus.  This enjoyable comedy features sympathetic protagonists taking on their less-sympathetic bosses and workplace absurdities in a clever critique of corporate culture and has been entertaining audiences for two decades since its release.

Directed by King of the Hill and Beavis and Butt-Head co-creator Mike Judge, Office Space was something of a box office failure when initially released, but it soon became a cult classic popular on Comedy Central and home video. The film also kick-started one of many popular memes with the antagonist Bill Lumbergh (Gary Cole) and his constant use of the line “If you could do that, that would be great.” “If you could do that, that would be great.” — Bill Lumbergh (Gary Cole)

Along with a hilarious scene of Peter and his friends beating up a malfunctioning printer with weapons. 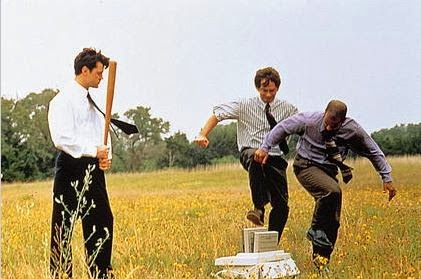 Office Space employees take out their frustrations on emerging technologies

As a featured film in this year’s “Careers, Conflicts, and Callings” series, Office Space provides these  five career takeaways:

If you hate your job, learn to love your life more. Peter hates his job.  But he takes action.  For any of us stuck in a dead-end or demeaning job, maybe that’s a signal to invest more in our lives beyond the workplace.  The more he learns to enjoy his life outside the workplace, the less he cares about hating his job.

Motivation is key. Peter tells his supervisors he rarely does anything at his job and doesn’t enjoy it at all. Their response is surprising: instead of firing him, they see that all he was missing is was the motivation to work hard and use his ideas to change the workplace for the better.  Managers need to find ways to motivate employees to use their talents.

Treat others in the workplace as you would anywhere else. The reason Peter and some of his co-workers are sick of their job is because they aren’t treated well by management at all.  Treated as humans with intrinsic value and ability, employees are far more likely to engage with their work.

You might not get the job you want right away. Peter is stuck in what seems like a dead-end job.  But any job can improve, and if it doesn’t or won’t, it may be time to look elsewhere.  Careers today typically involve more than one single job–and it may take time and effort to find what’s right for you.

Sometimes you can find the job that’s right for you. Most of the characters in Office Space have resigned themselves to their jobs they just don’t like the workplace they are at. They settle with the realities of their mundane jobs because it pays the rent and puts food on the table.  But most people want more than that and need a career that provides intellectual or other kinds of rewards as well.

At the time of Office Space‘s initial release, its biggest star was Jennifer Aniston, who played Joanna, the love interest for Livingston’s Peter. Mike Judge had wanted someone who looked attractive but not unattainable.  To him Aniston was perfect for the role. She was at the height of her Friends fame and probably didn’t need to appear in a smallish role in a low-budget comedy, but she liked the material and agreed to star in it.

2019 year marks the 20th anniversary of Office Space’s initial 1999 release.   Some consider 1999 to be one of the best years for film in history, citing the release that year of The Matrix, The Blair Witch Project, and Fight Club to name a few, and Office Space, though less groudnbreaking, is frequently mentioned alongside those modern classics.  For Office Space to be so well remembered and discussed today shows the film’s influence and timelessness. The dry humor the film employs has definitely influenced shows like The Office while its memes have been parodied in shows like Family Guy.

Office Space has even influenced real life as Mike Judge said one restaurant chain stopped requiring their employees to wear buttons on their clothes after the film made fun of it. The red stapler also used in the film for a joke did not exist before the film started, but when Swingline marketed the product, it became one of their best sellers!

All in all, Office Space is an enjoyable 90 minutes with plenty of laughs and career insights, not to mention the origin of many memes used to this day. It’s a hilarious look at how we view our careers and how one might leave it behind.

Office Space will be showing at 7 pm on Saturday, October 5th, 2019 in the Miller Auditorium (Stark 103). Our guest, Chad Kjorlien of Teaching, Learning, and Technology will join us and discuss the film’s relation to his career and its accuracy to the real job. For more updates check out the Winona Film Studies page on Facebook.

Admission is free and the film is rated R.

Film Major on his last year of school at WSU. Hoping to continue writing for books, films, etc.