Satan and Adam: A Tale of Two Decades 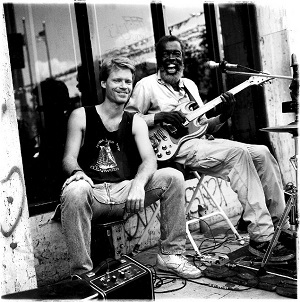 If you remember the 1990s during the New York blues renaissance, you might remember Satan and Adam. Sterling Magee (Satan) and Adam Gussow were a blues duo who started off on 125th Street in Harlem. They burst into the music industry when they released their debut album, Harlem Blues, in 1991. The film Satan and Adam, a longtime labor of love directed by Scott Balcerek, tells the story of how this beloved duo came to be and where they are now. Magee was an African-American R&B singer and guitarist who have worked with artists such as King Curtis, Marvin Gaye, and Little Anthony and the Imperials. He later rebranded himself as “Mr. Satan” and became a one-man band on the street of Harlem, where he met Gussow. Gussow is a Caucasian Ivy-league educated student who plays the harmonica. One day, after a bad breakup, he found himself wandering into the streets of Harlem where he heard Magee play. Against his better judgement and fear, he started playing with Magee and after a good four years, they were discovered and released their debut album.

The film is comprised of performance footage, interviews from past and current time, and recorded music. Scott Balcerek has been working on this film for about 23 years, hence, it is not a surprise when it opened the film with black and white footage.You will notice a lot of the footage dates back to the 1990s when Adam first started playing with Magee on the street. Although Gussow is the narrator of the story, there is a lot of footage and previous interviews of Magee. From this, we are able to build a connection with both of the subjects of this film. The film also brought in other perspectives from people who have been involved with them before. This enables the audience to get both an inside and outside look of the duo.

Balcerek chose to tell this story not only because it features magnificent music by talented musicians, but it brings to light racial issues of the time and what is it that made this duo so popular. This film proves that in the musical world, there are fewer racial barriers and everyone is free to collaborate as long as they have the courage to breach the boundaries between the races.

If you’re looking for an inspiring story with gorgeous music blues music, Satan and Adam is for you. You will be able to find deeper themes in the film such as friendship and humanity told through 23 years of filming and footage, resulting in a story worth remembering for the next couple of decades and beyond.