Released in the spring of 2018 from director Andrea Nevins, Tiny Shoulders: Rethinking Barbie sheds a new, modern light on a decade-old icon: The Barbie Doll. A documentary first released at the Tribeca Film Festival in New York City April 25, 2018 and then on popular streaming service Hulu for the world to view, Tiny Shoulders: Rethinking Barbie does exactly what the title suggests: it rethinks Barbie. Revealing the decades of change she has both prospered and fought for survival in, the film employs a range of techniques from talking-head interviews to a carefully-curated selection and display of vintage commercials and clips dating all the way back to the 1950s. The film touches on the past, present, and future of the world Barbie has made her own – whether that world has embraced her or not. Tiny Shoulders not only rethinks Barbie but also flourishes in its unique editing and charismatic social actors that reveal feminism is as relevant today as it was in the 60s and 70s.

Tiny Shoulders opens with a unique editing style that is aesthetically intriguing through the vintage clips of the Barbie doll in a frame that does not fill the entire screen along with footage from rallies and protests with chants of “I am not a Barbie doll”. Over and along with these shots, voice-overs and footage of interviews from multiple women and their thoughts on the iconic doll roll during the intro, creating distinct voice for the film. The introductory montage of the ideas to come in the rest of the film is pulled off boldly with a mix of past and present footage. With voice-overs that have clear impact, viewers are reminded of Barbie’s world-wide popularity with her insanely high recognition percentage of 98% globally since her 1959 debut – more than the President of the United States or the Queen of England – and growing critique, as displayed by Ms. magazine founder Gloria Steinem when she says “Barbie was everything we didn’t want to be and were told to be.” 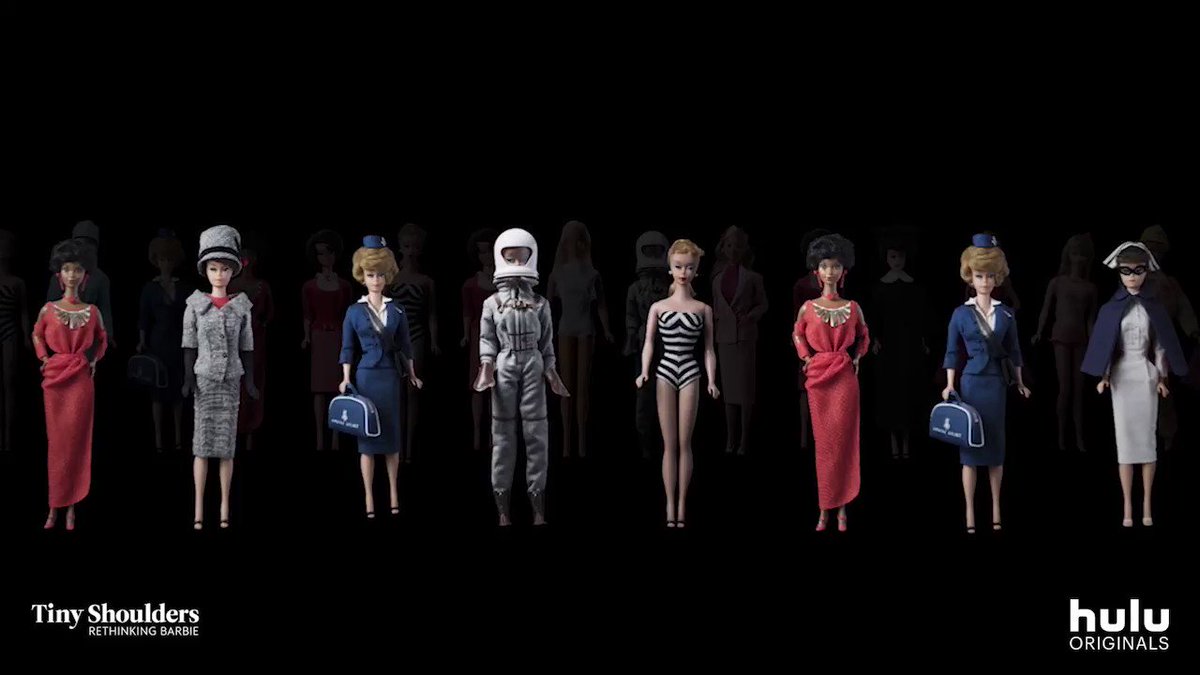 Some of the first Barbie Dolls, including “Miss Astronaut” and “Career Girl”.

Tiny Shoulders transitions easily between clips from Barbie’s past to real-time footage, following the Barbie team of today. Mainly focusing on Barbie Public Relations head, Michelle Chidoni, and Barbie Head of Design, Kim Culmone. The camera follows the two women and Barbie crew through their personal lives, meetings, and brainstorming sessions, allowing viewers to see their struggle to find a way to bring Barbie back to not only relevance, but to her original purpose: empowering young girls and women. This mission is called Project Dawn, and the Barbie team shares all of the best things about the doll’s history along the way: the creator, Ruth Handler, and her rare place in the business world as a woman in the 1950’s, revealing Barbie’s feminist roots; how the Barbie doll was adored by mothers for projecting a new thinking on young girls, no longer placing strictly “female” lifestyle choices on them; to young girls everywhere being able to play with and imagine themselves as independent “Career Girl Barbie” and “Miss Astronaut Barbie” in a time where women in the workplace was not a common reality.

While Tiny Shoulders clearly aims to show the positives of Barbie and the team truly passionate about continuing Barbie’s trademark as a cherished role-model for young girls, the negative impact of the doll’s past is not completely ignored either. Barbie has had a fair share of ups-and-downs, both in the stock market and in the eyes of the public. In recent years, the Barbie brand had come under heat for further instilling a certain body image that was literally unattainable, as when broken down, Barbie’s measurements could never exist for a human. Paired with her seemingly negative materialism, so much was heavily and negatively attached with the Barbie name that Mattel, the toy company owning the Barbie brand, underwent consecutive stock loss as well. That’s where Project Dawn came into play, and rebranding for the new generation could no longer be put off.

Some of the themes are undeniably shocking: a “Teen Talk Barbie” that said things like “Math is hard!” and “Let’s go shopping!”, and another Barbie that came with a scale permanently set to 110 pounds, holding a diet book that said “Don’t Eat” on its cover. Paired with these shocking revelations are commercials and clips from the era of those dolls. A commercial from 1965, encouraged women to keep their weight down by drinking Diet Pepsi in order to be attractive to men; for that time, these things were not as shocking then as it would be today. The editing used throughout the film depicts such comparisons in an easy-to-follow manner and adds to the film’s purpose instead of cluttering it, as some film on pop culture tends to do. 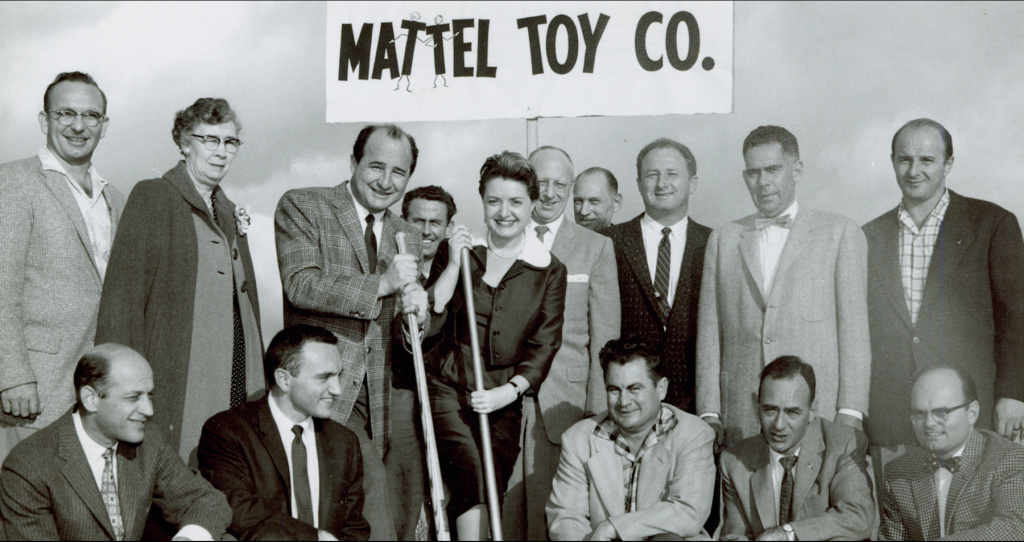 The film teeters on lines of ethics related to the sensitivity of body image, diversity, and feminism in a social-media age that is increasingly vocal and often edgy. However, Tiny Shoulders: Rethinking Barbie finds an equilibrium on those stilts, using an even amount of opinion that calls out the Barbie brand for not recognizing a shift in societal views, the backstory to truly understand the current Barbie brand’s mission, and footage of Chidoni and Culmone’s passion in respecting the young girls and women of today through Barbie.

Details and set-backs are revealed through the filming of the documentary and Project Dawn, including footage of Culmone admitting that dozens of higher-ups in the Mattel company had previously shut down the idea of making more diverse Barbie appearances; hence, the long-overdue change in Barbie’s body. From this footage, something negative is displayed of today’s societal views of body image and diversity. Most people think these ideas are necessary and positive in theory, but not everyone is ready to publicly support and do what it takes to prove that they are fully accepted ideas.

The new release of Barbie dolls, including Petite, Tall, and Curvy.

Tiny Shoulders follows Project Dawn and the Barbie crew all the way to its finale, releasing three new body-types of Barbie – petite, tall, and curvy – as well as new, vibrant hair colors and different skin tones and facial structures. These critical scenes show multiple years’ worth of planning and preparing for public reaction coming to a peak, tension at its highest when TIME magazine publishes the first issue and headline on the New Barbie. Acknowledgement that this release has been long-delayed but worthwhile in Barbie’s mission to positively impact future generations caps off the film and all that it had revealed about the core intentions of Barbie that had previously gotten lost.

Tiny Shoulders: Rethinking Barbie does so much more than just rethink Barbie – it aims to understand Barbie and celebrate a new generation with the new Barbie. Through excellent editing that transitions from past, present, and future seamlessly with next-to-nothing-unnecessary added, the film incorporates interviews and voice-overs from the very women who grew up alongside Barbie to truly add all the different voices that make up Barbie’s legacy. Director Nivens accomplishes the creation of a film celebrating feminism in all of its glory and grievances through its friend and foe, Barbie. There likely will never be a  perfect display of equality in the world, but taking Barbie has taken the right steps forward, and that’s a perfect way to start.